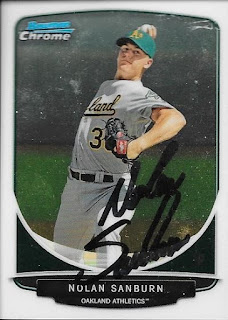 I waited a long time to get these cards signed, but once I was able to, I was super happy.  I had bought all of these cards from COMC when I saw that Nolan Sanburn would be coming to Kinston (I think it was with Potomac, but I don't remember).  The cards got here, but Sanburn was released before the series, so the cards stayed in my boxes and waited until I finally saw an address pop up.  I saw that he was signing, and jumped at the chance to get my stuff signed, finally.  Except, my cards had gotten separated somehow, and I couldn't find them all.  I found most of them right off, so I sent them TTM.  I then found the remaining cards, and Chris sent them off.  One of those, he gave back to me, but he used the rest, so they're all signed, now. 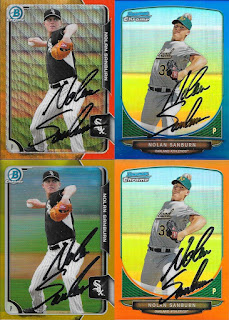 I had some pretty nice parallels to get signed, and they turned out great.  You can see why I really wanted to get them done.