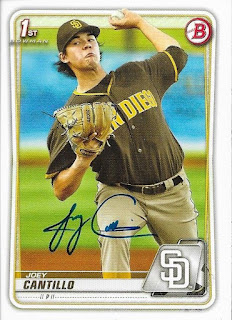 I added another 2020 Bowman to my autograph album when I got this TTM success back from former Padres, now Indians, prospect, Joey Cantillo.  He has a really nice signature, and it shows up well on the card.

Cantillo was involved in the huge trade earlier this summer which sent Mike Clevenger and Greg Allen to the Padres in exchange for Cantillo, Cal Quantrill, Austin Hedges, Josh Naylor, Gabriel Arias and Owen Miller.