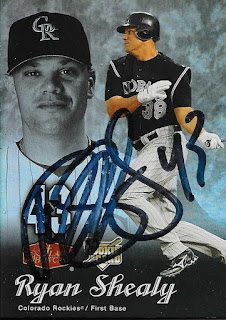 I got some really cool cards back signed when I got this success in from Ryan Shealy.  I knew I had several of his cards, they were just scattered among all of my card boxes.  I finally rounded up the ones shown and sent them off.
I enjoyed the 2006 Flair Showcase set, and now have a couple of them signed.  This one probably looks better in person, as the scan picked up some of the flaws in the marker used by Shealy.  Still, I like having the card, and am glad it got signed.