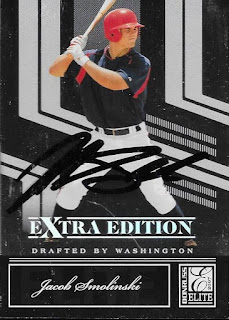 A recurring theme has come up recently; I have really enjoyed getting cards out of my former "rookies box" that I used to keep up with.  I had started the box back when I got back into collecting in 2005, but it got to be a pain in keeping up with it, so once the box filled up, I left it alone.  It had come in handy, all it took was for me to find one Mike Trout rookie in there and sell it (before his prices went nuts, though).  Oh well.  Most of the guys in the box got a cup of coffee in the majors, or didn't appear at all, so the box has really become a nice tool to use to get some cards for TTMs.
I was glad to find this 2007 Donruss Elite Extra Edition Jake Smolinski in that box, so it was a nice card to be able to get signed. 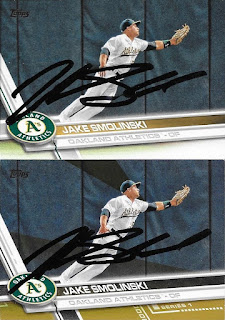 Posted by William Regenthal at 6:39 PM