Another TTM Success From Nolan Ryan A lot of times, what drives me to send TTM is how I think a card would look in my album once it is signed.  That is also the driving force behind when I may send to a signing subject a second or even third time.  That, or if I had forgotten to send a 1987 Topps to get signed for my set.
I have no idea where I got the above "Nolan Ryan Texas Ranger" card.  I feel like it has been in my box forever (and it probably has).  I may have picked it up somewhere because I thought it looked cool.  It sure does look cool, and I decided a while back that I really wanted to get it out of my box, get it signed, and into my album.  The card looks awesome now that it is signed, and may be one of my favorites that I have gotten back, so far. 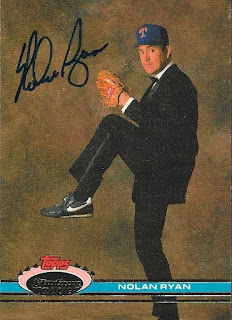 This 1991 Topps Stadium Club is also an awesome card.  I remember this photo appeared on an issue of Beckett a while back (and I probably still have that Beckett somewhere).  I found this in a Goodwill box that Mom had found for me.  It HAD to get signed, as well.
I had some money saved up for the National back in May, and when I found out at the time that the National was being pushed back, I took the savings and paid off my car.  I still had some money left over, so I took that and spent some money on some signings.  This was one of them.
I mailed to Ryan's foundation on May 11 and paid his fee of $60/card.  I got the cards back signed on June 29, for a 49-day TAT.
Posted by William Regenthal at 2:32 PM

Whoa. He charges $60 per card? I'm scared to even look at what his certified pack pulled autographs are selling for.

His foundation office is less than three miles from my house.

That Texas Ranger card is fantastic!