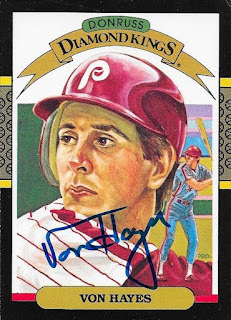 I sent to him before, but didn't get the cards back.  I saw that he has a fee, so I tried again, and got two cards back signed from Von Hayes.  The above 1987 Donruss Diamond Kings turned out really well.  I was going to send him one of these regardless of my 1987 Topps set pursuit.  I really like the Diamond Kings, and am happy to get this one signed. 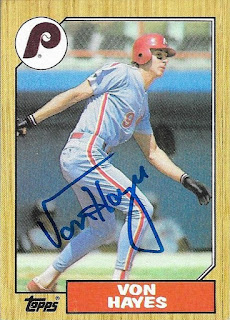 I did get an 87 Topps signed.  This card turned out nicely, as well.  I forgot Hayes was on the Phillies Leaders card, so I will be sending that one out sometime soon.