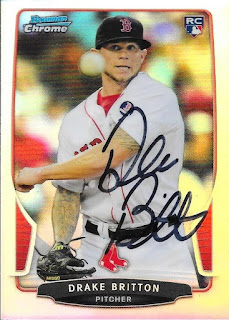 I added a few fairly recent cards with this TTM success from former pitcher, Drake Britton.  The above 2013 Bowman Chrome refractor turned out really well.  Funny thing, though, it that it is the exact same picture that appeared on his 2013 Topps card.  Great job, Topps!

Still, all of the cards turned out great, and I was glad to add them to the album.

Posted by William Regenthal at 11:05 PM