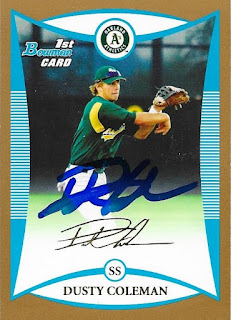 I got a few more cards out of my older Bowman box recently when I got these cards signed by Dusty Coleman.  The above 2008 Bowman gold turned out really well.  I don't have many 08 Bowmans in my album, so it was nice to add this one. 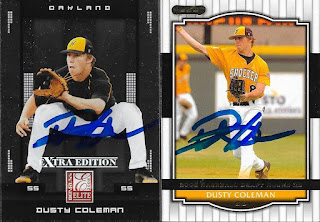 He also signed a 2008 Donruss Elite Extra Edition (above left) and a 2008 Razor (above right).  I remember when Razor was a thing, and they had Matt Wieters signed to an exclusive contract.  That's why I have so many 08 Razor cards in the box.  I'm glad I got one signed, and it turned out really well. 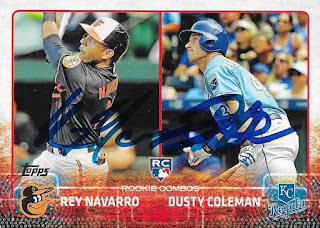 Finally, I got this dual 2015 Topps Update signed that I had previously had signed by Rey Navarro.  I think Chris and I saw Navarro at an Independent League game last season.  I may have another of these signed by Navarro, so I probably should see about getting Coleman on it as well.
Coleman (b. 1987) played in the majors in 2015 and 2017 for the Royals and Padres.  He had 15 hits, 4 home runs and a .211 batting average.
I mailed to Coleman on June 8 and got the cards back on June 20, for a 12-day TAT.

Posted by William Regenthal at 5:42 PM