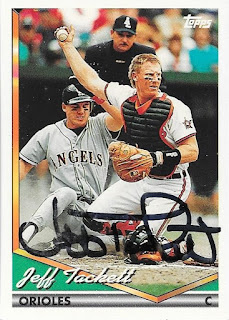 I added a bunch of cards of former Orioles backup catcher, Jeff Tackett, to my autograph album with this TTM success.  I had a ton of his cards, and sent as many as I could off for signature, and they came out pretty well.  I liked the above 1994 Topps, because I don't have many of them signed.  This might be one of my least favorite sets, mainly because all of the cards stick together, and become a brick, after a while.  I'm sure if I went into my completed sets, my 94-05 sets are all probably bricked.  I don't want to think about that. 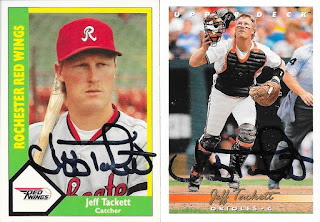 I got a 1990 CMC AAA signed out of the attic box that my mom gave me a long time ago.  The 1993 Upper Deck (above right) is a rare set to be found in my albums.  The set itself isn't rare; I just don't have many of the cards, and even fewer of them signed.