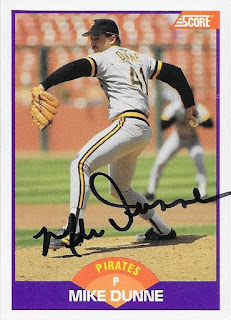 I was able to get 2 of the 4 cards I sent to Mike Dunne signed via TTM when these two came back.  He also sent back the other two, so I added them to my pile to send out to people who need TTM ideas.  I've been doing that for a while now; sending "TTM Starter Packs" in hopes of getting others interested in trying to get their cards signed.  It seems to be a popular thing that I do. 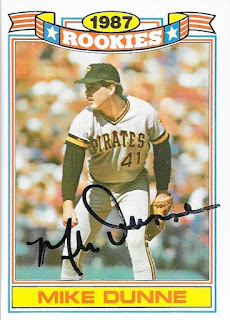 The cards that I got signed were a 1989 Score (what an underrated set) and a 1987 Topps Glossy Rookies.  Both cards look good, and I'm glad they came back.