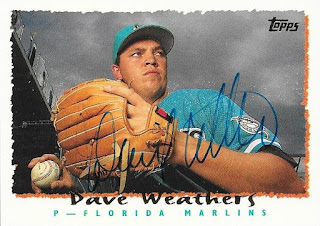 I had put these cards away after not seeing any successes from Dave Weathers for a while.  I found the cards again when I was going through a box, and checked to see if he had started signing again.  He was, so I sent these cards off.

The above 1995 Topps is a really good shot, and I was glad to get it signed.