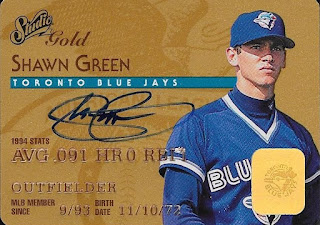 There have been a bunch of private signings that I have wanted to take part in, but this one that popped up for Shawn Green was once I was really excited about.
I had a ton of Green cards dating back to his debut that I have held onto for 20+ years.  So, when the signing came up, I had a ton to choose from.  The above 1995 Studio gold card really turned out awesome.  I loved these cards back in the day, and had even built this set.  The cards have all dissipated over the years, but I still had this Shawn Green. 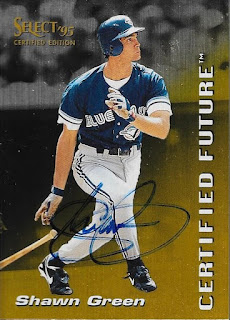 I wished that this 1995 Score Select Certified Edition came out a bit better, but the card still looks great.  I can't really complain all that much.

Green appeared on the 2013 Hall of Fame ballot, but only received 0.4% of the vote.  This is most likely due to his connection to PEDs.

Posted by William Regenthal at 7:53 PM