Two New Cards For The 87 Set 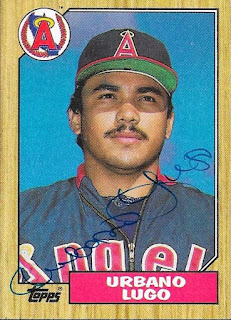 I had heard that there was a $25 Ebay coupon going around, so I googled it and figured I'd give it a shot.  It turned out that I qualified for the coupon (I had better, since I have been on EBay since 1999), so I used it to knock two cards off of my 1987 checklist.

Urbano Lugo is a tough signature to get, apparently, and this card used up almost all of the coupon.  Still, I was able to cross him off of the list, and I can concentrate on other tough signatures from here on out. 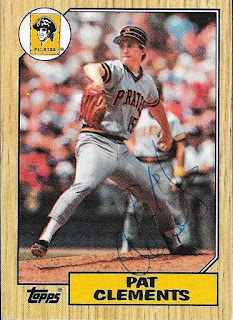 Pat Clements also appears to be somewhat tough to get, but his cards are a lot cheaper than Lugo's.  I needed just a few more bucks to fill my cart and make the coupon work, and this one was just $5.00, so I figured, why not?  I spent a total of $7.10 on both cards, so I won out.