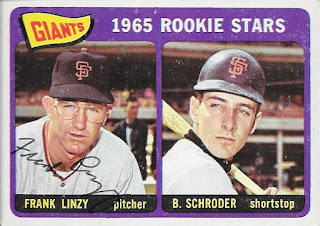 Some more vintage cards were added to my album with this TTM success from Frank Linzy.  The cards turned out really well, even though Linzy used a black pen.  It looks like Schroder signs as well, so I may try to complete this card.

I also got Linzy on these three cards.  The 69 (middle) is really beat up, but instead of trashing it, I included it in the mailer.  The card will be fine in my album; they don't have to be in pristine condition.