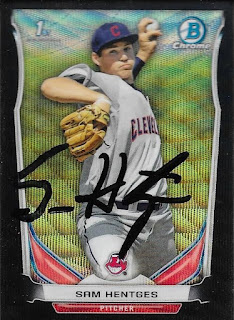 I had a couple cards left over from last year that I wasn't able to get signed in person by Sam Hentges, so I sent to him TTM.  I was happy that the cards came back signed, and they look really good!

This 2014 Bowman Chrome Black Shimmer refractor is not numbered, but it still is really cool.  I pulled it out of a pack, and was glad to see that Hentges signs.  Otherwise, it would be in a box, somewhere. 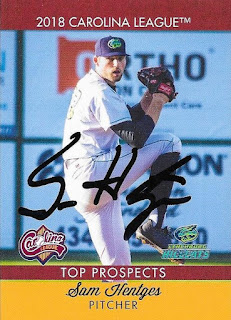 I also was able to get my 2018 Carolina League Top Prospects set card signed.