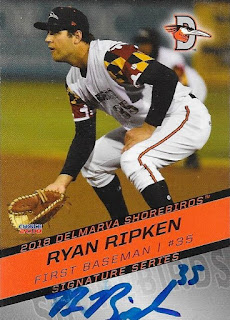 Chris and I found ourselves at Five County Stadium on July 4 to see the Mudcats take on the Keys.  It rained most of the time we were there, and eventually, the game was called.  We did, however, manage to get a few autographs, which was nice.  The rain did affect two of my cards, but the rest turned out ok.

The highlight, as has been usual this season with the Keys, was a long conversation we had with Ryan Ripken.  He is just a good dude.  I really enjoy talking with him, and this time around was no different.  We talked about the weather, of course, and some other baseball-related topics, as he waited on word about whether or not the game would be played.  He even gave Chris and I a heads up that the game would be called, so we could beat the traffic. 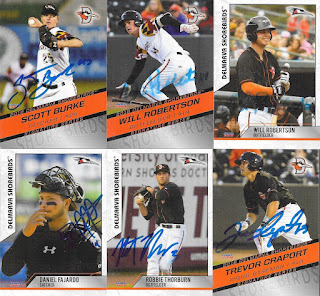 I had recently picked up some Delmarva team sets, so those gave me some cards to get signed.  The two Will Robertson cards got wet, and the signatures suffered.  He tried to sign them again for me later, but they couldn't be helped.  I told him that it was not a big deal, as I don't sell my cards, and I would have the story of the rain to go along with them. 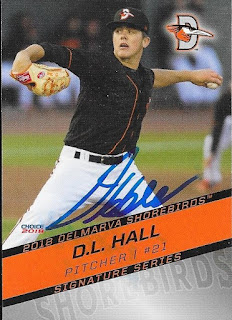 Finally, I was able to get a few more DL Hall cards signed.  He is always really nice, and has been accommodating to Chris and I.

As the season is winding down, my stash of cards is getting smaller and smaller, which I like.  I'm hoping I don't have much left over when the season is done.
Posted by William Regenthal at 9:03 PM