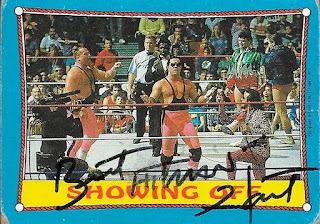 Sometimes, I get TTM success from folks other than baseball players.  This one, in particular, I was really excited about, because it was from one of my favorite wrestlers growing up.  I saw the Bret Hart was signing TTM, so I picked up these cards out of a quarter box at a card show in January.  I, then, researched how I could send to Canada, and get the return mail back.  It took buying Canadian stamps online and having them sent to me (thanks, Google), and I was all ready to get them mailed out. 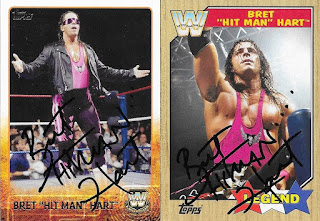 I'm really happy with the cards I sent, and how they turned out.  The card at the top of the page is a bit rougher, but I remembered that set from when I was a kid, and wanted it in my album.

Hart (b. 1957) is a member of the legendary Hart Family of wrestling.  Hailing from Calgary, Alberta, Canada, the Harts have been a fixture in Canadian wrestling for decades.  Patriarch, Stu Hart, ran Stampede Wrestling in Canada and showcased his sons (most notably, Bret and Owen), along with his sons-in-law, Jim "The Anvil" Neidhart and The British Bulldog, the Hart Family was a fixture in wrestling in the 80s ad 90s.

Bret made his wrestling debut in 1978 and retired in 2000.  His retirement was due to a concussion he received when he was mule-kicked in the head by Bill Goldberg in a WCW match.  In all, he was a World Champion (WCW and WWE) 9 times, and was inducted into the WWE Hall of Fame twice (individually in 2006 and as a member of the Hart Foundation in 2019).

That's awesome that he signs TTM.