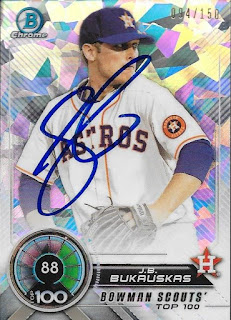 I got a package in the mail a couple weeks ago from my friend, John, in Texas.  In it was another stack of 50/50s that he was able to complete for me.  I had forgotten that I sent him these cards, but they got done and look great.  The highlight is this 2018 Bowman Chrome JB Bukauskas atomic refractor numbered to 150.

John got me a ton of Bukauskas, since I missed him last year when Buies Creek came through.  John looks like he was really persistent with him, and got me a bunch of cards done. 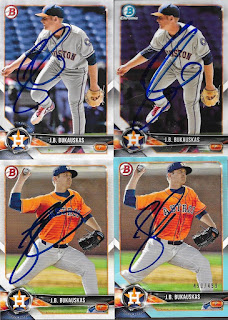 I had even tried to get my friend, Ben, to get some of these done last year, but by the time he got to the games, Bukauskas was already called up to AA.

I'm trying to avoid typing Bukauskas too much, but it is tough. 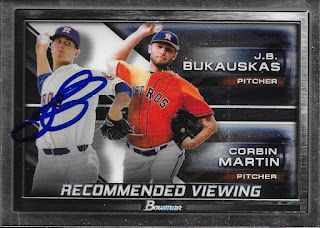 Man, that was a lot of Bukauskas cards. 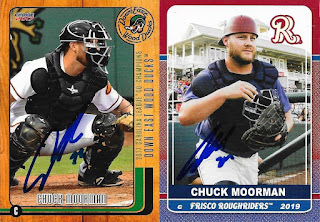 It is always nice when I can add a 2017 Wood Ducks card to my set.  There are a couple of guys who will be impossible to get, but for the most part, I have done well with the set.

John also started me a Frisco set, and they look really cool.  It is nice to see some AA cards of the former Wood Ducks. 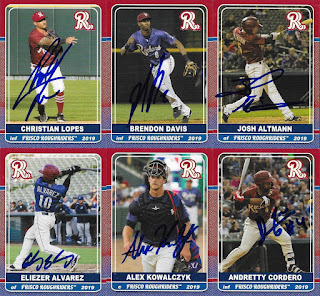 A lot of these guys are missed, and one of them (Altmann) is back. 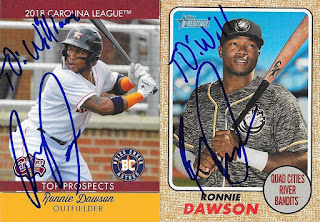 Ronnie Dawson has started personalizing, but that's ok.  I aready had the 2017 Heritage Minors, and the Top Prospects card is mine anyway. 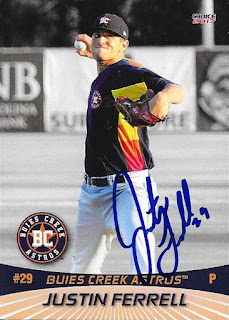 Finally, John got this Justin Ferrell card signed for my Buies Creek set from 2017.  I liked this design, and am glad to get it back signed.
Posted by William Regenthal at 7:47 PM