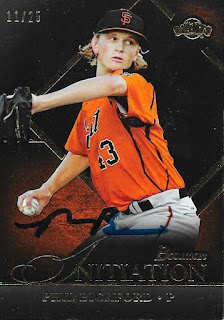 This past Saturday, with Chris out of town, I decided to use m rain check for the July 4th Mudcats game so I could catch the Blue Rocks.  Wilmington is the only team that hasn't made a trip down to the Wood Ducks yet this season.  I thought it would be a good idea, especially with Chris gone, to get a few cards knocked out.  That way, I would have a head start for when they finally come to town this weekend.

Also, I stocked up on some Mudcats, and was able to get some nice stuff signed.  The above Phil Bickford was so nice, he even complimented it.  He had never seen the card before.

I had cards from the Carolina League Top Prospects and All Star sets, so that gave me a few guys I wouldn't have had. 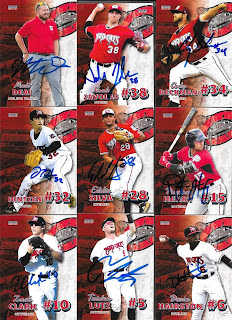 I also had picked up two Mudcats team sets, and started working on those.  This year's team set looks really cool.  I'm glad I picked them up. 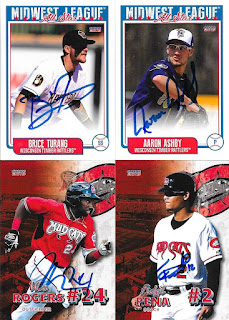 I also was able to pick up a Midwest League All Star set, so I started in on that, as well.  I'll have to send off a lot of those cards, since they have some teams I won't see, but the cards are still cool, and there are some big names in there. 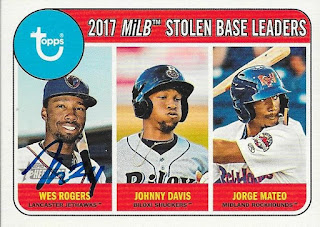 It took me a while to realize that the Mudcats' Wes Rogers was in 2018 Heritage Minors, but he is really cool, and I was able to get him to sign this. 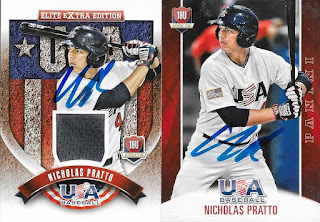 I had waited a long time to get some of my Nick Pratto cards done.  The above Team USA cards were found at a show, and look really great. 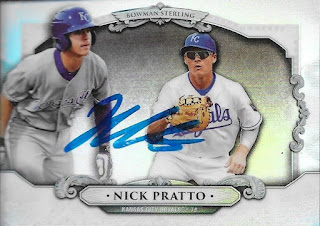 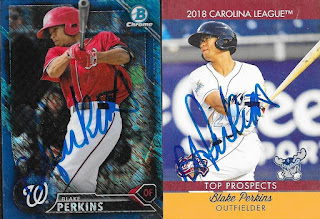 I was worried that I wouldn't get this Black Perkins 2016 Bowman Chrome Blue Shimmer refractor signed; he had been called up to AA earlier in the season.  Thankfully (for me, not for him, sadly), he was bumped back down to High A, and I was able to get my card signed. 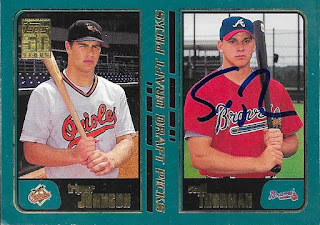 Scott Thorman didn't seem like he was going to stop for us, but his son told him we were calling for him, and he turned around and signed for Jackson and I.  He seemed nice, though, and signed everything we had. 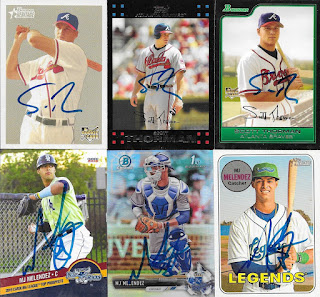 I have a ton of MJ Melendez, and he signed three of the cards in my book.  This was one of those times where having Chris right there would have really helped. 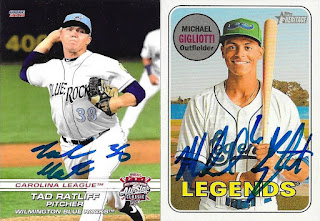 I misplaced my snap case I had set aside for Lexington in April, so I missed out on some Michael Gigliotti.  Thankfully, Gerard had sent me some in a 50/50, and I ended up with a 2018 Heritage Minors. 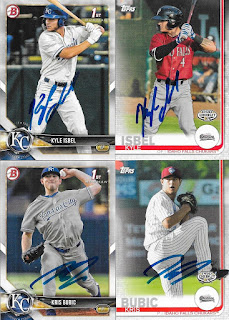 Kyle Isbel signed only one card for us, and Kris Bubic was two-per.

Brewer Hicklen signed everything we had. 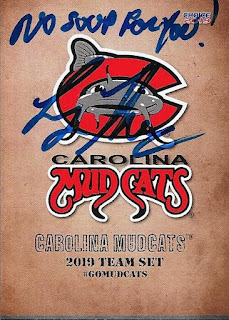 Finally, the Mudcats were having a promo where the "Soup Nazi" from Seinfeld was there signing autographs.  I'm not much of  Seinfeld fan, but I knew of the character, so I got the team set checklist signed by him.  I even had him put the "No Soup For You" inscription.

Next series is the Mudcats coming down to the Wood Ducks.  Hopefully, the weather will hold out.
Posted by William Regenthal at 7:31 AM