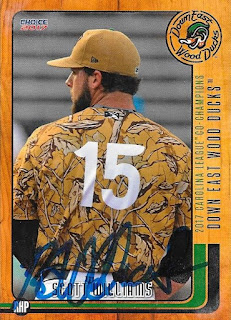 The Wood Ducks came back into town at the beginning of the month for a quick 3-game series against the Dash before they headed out on the road again.  I went to all three games and did pretty well with getting stuff signed.

I'm running low on Wood Ducks, which is fine with me, since I don't want to be stuck with a bunch of stuff at the end of the season, and I can concentrate on the opposing teams.  That being said, the Woodies team sets came out, so I picked up a bunch of them, and worked on getting what I could signed.

Also, a couple pitchers from higher up are in town on rehab assignments, so I was able to get some of their stuff done, as well.  Take the above 2017 Wood Ducks team card of Scott Williams, for example.  I have had this card for a while, and finally got mine, Chris's and Gerard's done. 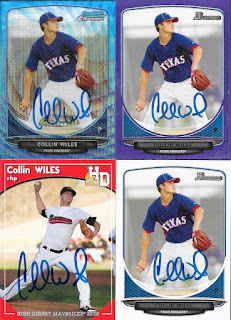 I also picked up some cards of Collin Wiles, and he signed them all.  Chris got one each of all of these, as well.  He also got a 2013 Bowman mini, and so did Gerard. 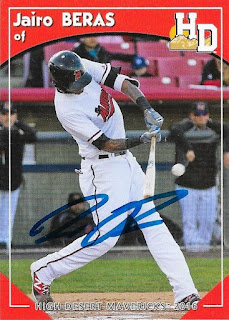 I liked these High Desert team cards, and the seller on Ebay had this Jairo Beras along with the Wiles, so I picked them both up. 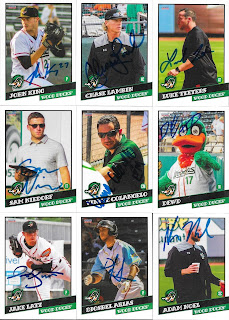 The Wood Ducks team set is already almost complete.  There are several guys who have been moved up, so I will have to send them on up to Frisco. 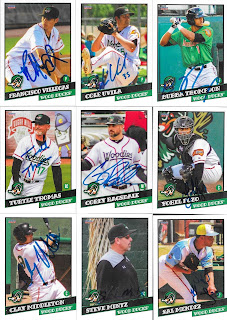 Alone with sets for Chris and I, I also worked on sets for my friends John, Ethan and Gerard. 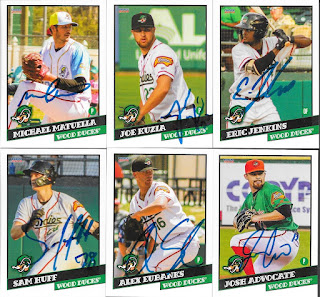 I feel like I did pretty well in getting them going.  I wish I could go ahead and knock Yanio and JP off of the list, but those two are tough, as usual. 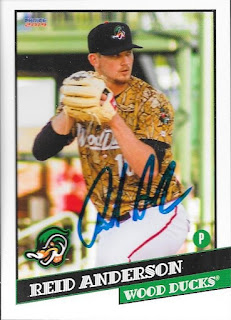 I did get everyone that is with the team who is in the set, other than Yanio and JP.  I feel like I did a pretty good job for the folks I am helping. 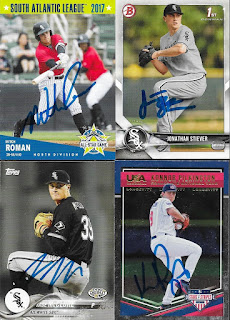 I didn't have a whole lot for the Dash, and was able to knock it all out pretty quickly in the first game.  My friend, Jackson, gave me some stuff to do for him and I got those done in the next two games.

The Wood Ducks will be back this week when Lynchburg is in town.  Too bad Nolan Jones just got called up to Akron.  I was hoping to add him on some more cards.
Posted by William Regenthal at 9:43 PM