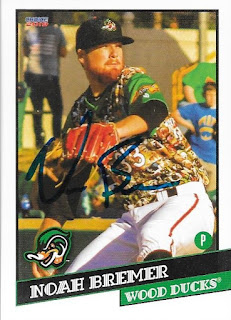 Running low on Wood Ducks card, I was glad that I got my 2019 Carolina League All Star and Top Prospects sets in from my friend, Michael.  Additionally, I was able to add Noah Bremer back to my autograph album, since he was activated from the DL recently.

The coolest thing about his card in this year's team set is that I actually own the jersey that he is wearing on the card.  Also, my dog is on the jersey, so my dog now has a baseball card.  When I asked Noah to sign this, I told him about the jersey, and he remembered me getting it that night, which was cool. 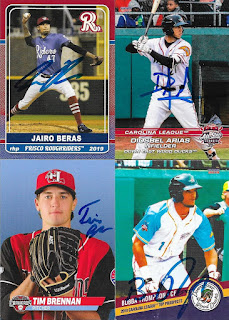 My friend John, in Texas, sent me some Frisco team set cards that I was able to get done by Jairo Beras.  Tim Brennan was called up from Hickory, so I got his card done; Diosbel Arias has an All Star card, and Bubba Thompson took care of his Top Prospects card. 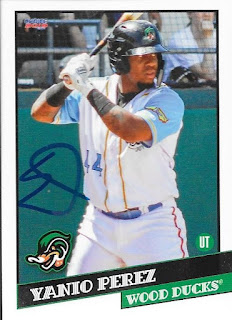 I was able to get Yanio Perez on his team set card, as well.  Of the Wood Ducks left on this team (and not out injured), that leaves me with JP Martinez to get for my set.  The rest are waiting on returns from the DL, and the stack I sent out to John. 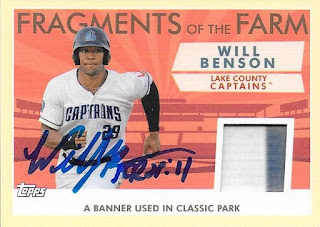 I had a few Hillcats that I needed to get, especially this relic card from 2019 Pro Debut of Will Benson.  Benson was one per, but he was really nice.  I had him sign this card first, and it looks awesome. 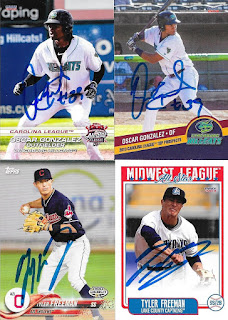 Oscar Gonzalez was in the Carolina League All Star set, and the Top Prospects set, so those got done.  Tyler Freeman was really tough but I did come away with these two cards, so I was happy with the results.

Justin Garza was really nice, so I got the die cut Elite Extra Edition and a Stars and Stripes completed. 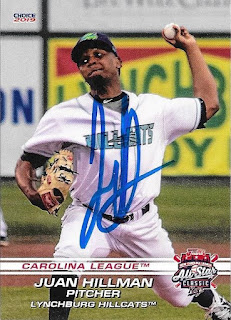 Finally, I hit Juan Hillman for quite a few cards, but the only ones I needed were the Elite Extra Edition and Carolina League All Star.
Posted by William Regenthal at 8:08 PM