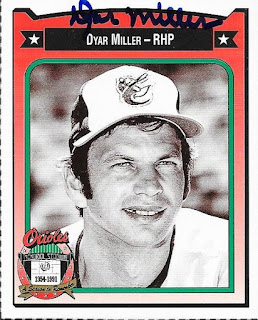 I got a former Oriole's autograph when I received this TTM success from Dyar Miller.  I wanted to get one of my 1991 Crown Orioles cards signed, and also sent some others.

Miller also included one of his own cards, which was nice.  Along with the card, he included a full-page note thanking me for being a fan.  I really love it when players do that!