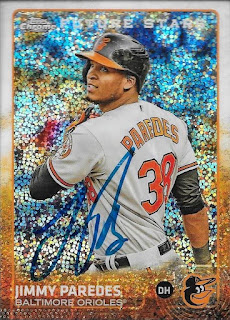 Before Chris went off to camp for a week, he and I decided to take a mini-day trip across the state and catch a game at the new High Point Rockers stadium.  The Rockers are a new independent league team that has taken residence in High Point, just outside of Winston-Salem and Greensboro.

We saw them take on the Somerset Patriots, and I spent a good amount of time a few days prior by looking for cards of guys who we would see.  I did pretty well, and Chris even helped me search my Orioles boxes for the above 2015 Topps Update Chrome sparkle Jimmy Paredes.  I knew I had the card, and when I saw he was on the roster, that was the one card that I wanted to get signed.

Between my box of older prospect cards and a trip to the new LCS in town (the one I have been going to for the last 10 years has been bought out and closed), I got a good many card signed at the game.

You have to pick a side at their stadium and go for one team at a time, so I made sure I hit Somerset first so I could get the Paredes done.

Luckily, I got most of the Somerset guys I needed, save for two, so I was hoping I would knock off the final two, then head to the Rockers side and grab some as well.  I saw that this idea wasn't going to work, but Chris spoke up and said he would go over to the Rockers side and try to get whatever he could done.  I didn't have his book along with us, so I had to hand him the individual players and tell him the numbers to remember. 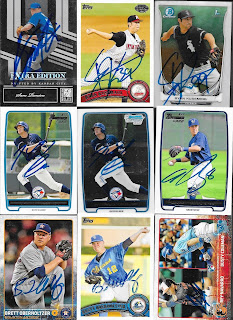 Chris got all but one of the Rockers players taken care of, and that was because the guy wouldn't stop.  I got one of the players that I needed (Ryan Kussmaul) and the other player didn't stop for me, so he and I missed one guy each.  That isn't too bad.

The only problem I saw with the independent teams was that neither team had an updated roster posted that I was able to find online.  There were a few pitchers who were listed on each roster that I wanted to get, but they weren't there.  I don't know if there is a better way for me to figure out the rosters, but that would be nice.

Chris gets back from camp today; the week without him has been no fun, so he needs to get home.
Posted by William Regenthal at 1:21 PM