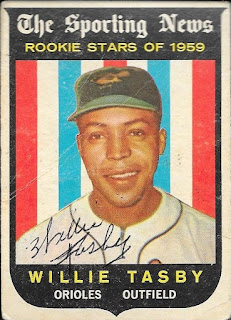 I picked up some vintage cards when I was at the Greenville card show a while back, as you all know.  I still have a few cards here and there of guys that I had picked up.  Most of them are guys who charge for autos, like this success from Willie Tasby.

I was excited for this one because I was able to add a former Oriole that I hadn't heard of to my album.

I was also happy to add this 1959 Topps Rookie card to the album, as it was something a little different than the regular 1959s that I have been able to get. 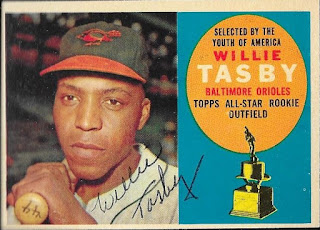 This 1960 Topps was also really cool to add to the collection.  I know a lot of folks love the Topps All Star Rookie trophy cards, so this was a cool one to put away.