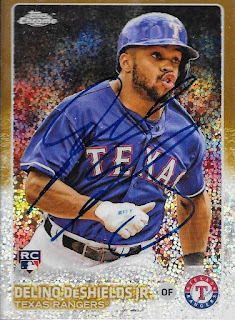 Now that we are thawing out here in eastern North Carolina, one of the first signs of Spring is upon us.  Graphing has resumed here on the blog, as I have returned from the annual Down East Wood Ducks Hot Stove Event.  I didn't know about the event last season, but this year, I wasn't going to miss it.  Thankfully, the USPS finally cooperated and got me most of the cards I ordered for the event in my hands before I left the house tonight.

The above 2015 Topps Update Chrome gold shimmer parallel was the card that I absolutely wanted in my hands before I left for the event, and thankfully, it was here at 5PM when I got off of work.  It came down to the wire, but I got the card in and got it signed.  This is numbered 32/250 and turned out really great! 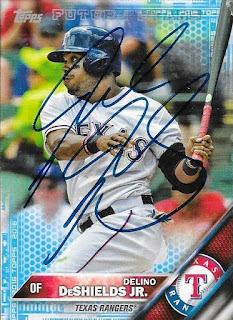 I had gone online last week and bought several nice Delino DeShields, Jr. parallels, thinking I should have no problem with them getting here before today.  The snow storm that came in last Wednesday really made me sweat it out, especially since the USPS didn't deliver mail to my house until today.  This 2016 Topps mini blue parallel is numbered 8/10. 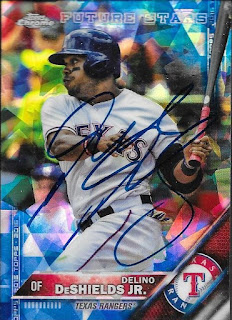 I was really excited about this 2016 Topps sapphire parallel, and I was right to be so.  It came out really nicely. 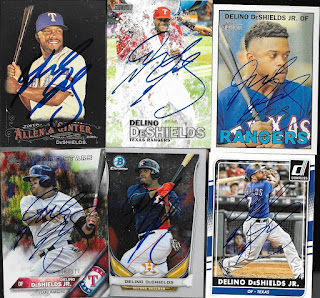 DeShields signed everything Chris, my wife and I all had.  One drawback was some of the cards were a little curved, and that doesn't lend well to scanning.

DeShields was really nice.  The event had a "social hour" before dinner, so you could just walk around the room and chat with whomever, while checking out silent auction items.  I saw DeShields right away and he walked up to us immediately and signed for the three of us.  Later on, as he was scoping out the silent auction items, I spoke with him at length, until some guy in a suit butted in and interrupted us.  DeShields is a really nice, classy guy, and I am glad I was able to hang with him for a bit.  I asked him if he was ever star struck at meeting anyone, but he said that with growing up in baseball, he never really had that happen.  He did go on to say that at Spring Training the season when Derek Jeter was retiring, Jeter remembered him as a kid, which DeShields said meant a lot to him. 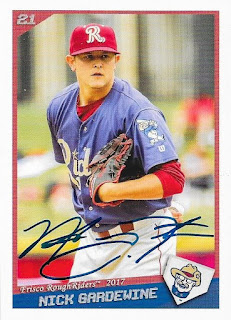 We met Rangers reliever, Nick Gardewine.  He is fresh of making his Major League debut.  We talked for a while about how it felt having been in the majors now, and what this offseason has been like for him.  He is only 24, so it was really nice to see and talk to a kid who is truly living his dream. 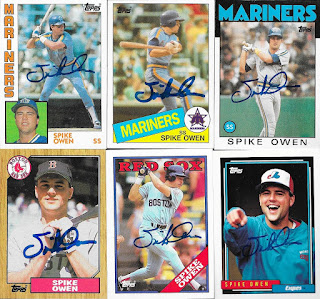 Howard Johnson has been promoted from Wood Ducks manager to AAA hitting coach.  Taking his place is former Major Leaguer, Spike Owen.  Owen was really nice to us, and signed the 9 cards that the three of us had. 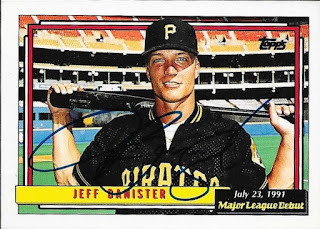 Also in attendance was Rangers manager, Jeff Banister.  I picked this 1992 Topps Prospects card off of EBay, and am glad I did.  It turned out really nicely, I think. 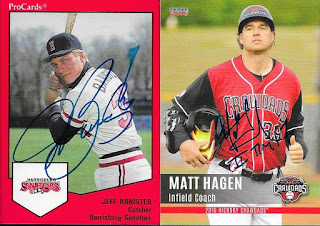 Along with Banister and Owen, Matt Hagen, the Hickory Crawdads manager made the trip to Kinston.  Hagen was really funny, as I asked him if he knew where Matt Hagen was.  He said, "Yeah, I do, actually..."  Then he looked around a bit and said "Oh, yeah, that's me!"  So we laughed and chatted about how we may make the trip to Hickory this season.  He was super nice, and I hope that I can say hello to him if we do go up that way. 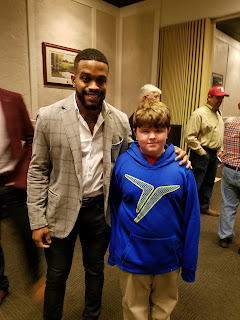 Chris posed for pictures with some of the guests; here is Delino DeShields, Jr. 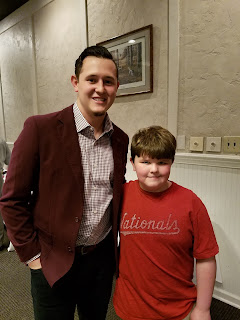 This is Chris with Nick Gardewine. The event had a roundtable discussion with DeShields and Gardewine.  It was really interesting hearing them talk about being called up to the majors and some of the preparation that they go through for games. 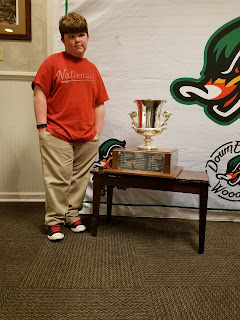 Chris and I got to see the Mills Cup, which the Wood Ducks shared last season with Lynchburg. 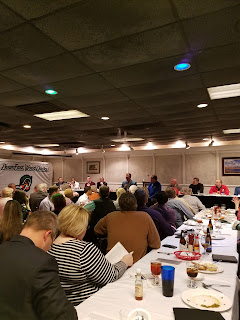 The event wasn't too crowded, but there were a decent amount of people there.  I saw a few folks I knew from games, so that was nice. 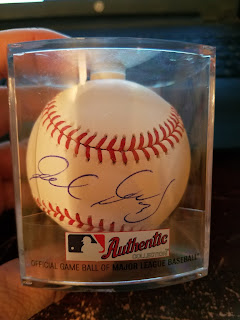 In even won a ball at the silent auction!  This Delino DeShields, Jr. signed baseball was a last minute bid that I put in and actually won!  Someone outbid me on another ball right at the last second.  Not fair!