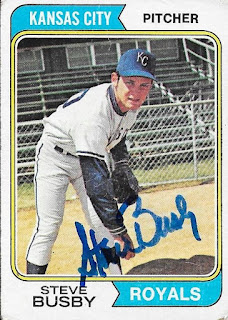 TTMs have still been really slow to come in lately.  That can only mean that at some point, I'm going to have a huge mailday.

One of the ones that has trickled in lately was this success from Steve Busby.  I enjoyed this 1974 Topps that I was able to get signed by him.  It must be a photo from Spring Training, as evident from the aluminum bleachers in the background.