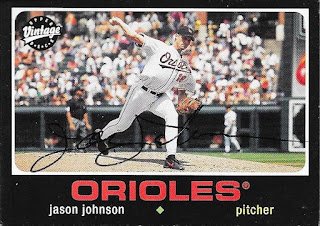 Initially, I was really excited to get these cards back signed from Jason Johnson.  That is, until I posted them on my Instagram and had someone comment saying that they were ghost signed.  I took a look at certified autos of Johnson and they do appear different that certified autos of his.

That's not to say that he didn't rush the signatures or that he signed cards differently than he signs balls and photos.  I probably have a few other subjects who may have ghost signed, but I don't know for certain.  Ghost signed means that someone else signed them on Johnson's behalf (maybe an agent, or his wife).

Still, these cards were sent to an address listed for a Jason Johnson, and they came back signed.  I will treat them as such and still will put them in my album. 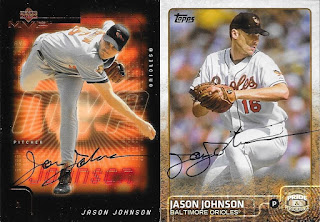 These two cards were the ones I was most excited about.  Especially the 2015 Topps Pride and Perseverance.  It is a really cool card that talks about Johnson's use of an insulin pump while he pitched.

The Orioles picked Johnson up in 1999 in a trade with the Devil Rays for former Orioles prospect, Danny Clyburn.

I mailed the cards to Johnson on January 2 and got the cards back on January 13, for an 11-day TAT.
Posted by William Regenthal at 8:38 PM