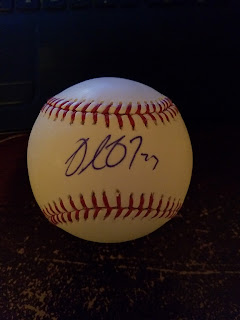 My first stop at Orioles Fan Fest wasn't an autograph line.  It was the Orioles merchandise room.  I wanted to see what jerseys were available, and maybe pick up something else that caught my eye.  Well, I found a signed baseball for only $10.00, and it was one I have wanted since October 3, 2014.

Delmon Young might have a ton of off-the-field issues, but that doesn't take away from the fact that he owns probably the biggest Orioles hit that I have ever seen.  The fact that I was there to see it in person makes it even better.

I was in attendance, along with my son, Chris and my friend, Ryan, and got to feel the electrifying moment when Young's 3-run double gave the Orioles the lead in Game 2 of the 2014 ALDS against the Tigers.  Every time I watch it and hear the crowd erupt, I get goosebumps.  It really was something to experience.

Here is that moment from the 2014 ALDS Game 2 that I was referencing.

Posted by William Regenthal at 7:19 AM