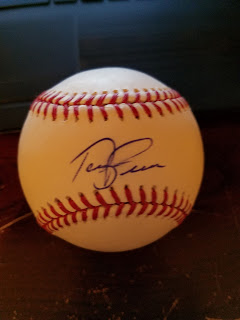 Michael sent me a huge box of stuff for Christmas; actually one of the first boxes I got in.  He included a bunch of things that he signed himself, like he always does.  This time he included a nice game used baseball that he signed and included a long bible verse.  It was a really cool ball that I have since put away.

I was surprised at this baseball, though, because I didn't recognize the autograph.  I had to message Michael, and he told me it was Terry Francona.  This was awesome, because I really wanted a Francona ball, and anticipate that he will be in the Hall of Fame at some point.

Thank you so much for the Christmas gift, Michael!  I really like the whole package, but I definitely needed this ball in my collection!
Posted by William Regenthal at 5:54 PM