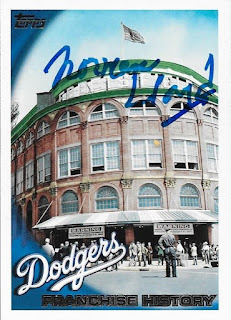 This was a really cool TTM success that came in a few days ago.  I got the idea from my buddy, Chance, to send to actor, Norman Lloyd following his appearance at the World Series this past October.  Apparently, Lloyd is the oldest living former World Series attendee, having attended the 1926 World Series in New York.  Lloyd attended that World Series as 12 years of age and watched Babe Ruth split his pants on a slide.

In 2017, at the age of 102, Lloyd witnessed a game between the Dodgers and Astros at Dodger Stadium, some 91 years later.

Lloyd (b. 1914) was a close friend of Alfred Hitchcock, having worked with him on Saboteur and Spellbound.

He is also known for roles in St. Elsewhere, Twilight Zone and Deat Poets Society.

Here is a link to the LA Times article regarding Lloyd's visit to the World Series.