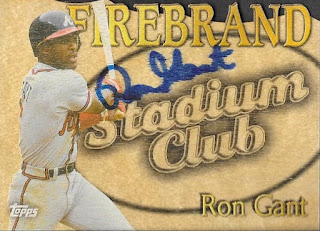 I sent off a bunch of TTM requests to start the new year, and a few of them were of guys I had gotten in the past.  Sid Bream, for example, was someone I needed on some 1987 Topps cards.  I sent a few 87s out to a few other guys to see if I could get them back.  Ron Gant doesn't have a card in the 1987 set, so I thought I was done sending to him.  That is, until I found the above 2014 Stadium Club Firebrand insert at my LCS.

The card floated around my card room for about a year, until I finally put it in my "to be TTMed" box.  I ended up sending it out earlier this month, and am glad I did so.  It is made of wood, and turned out pretty well.  I was afraid it would break in transit, but it turned out ok. 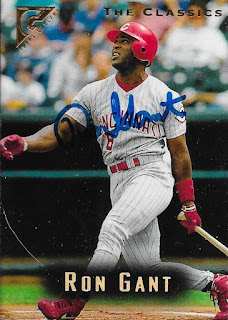 I added a few other cards to the request, including this 1996 Gallery that I picked up while I was visiting Andrew back in May. 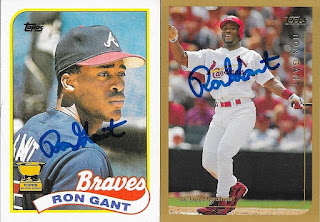 I mailed the cards out to Gant on January 2 and got the cards back on January 11, for a 9-day TAT.
Posted by William Regenthal at 11:48 AM