Congratulations To The Hall of Fame Class of 2018 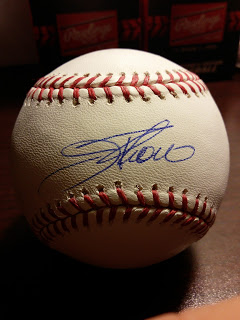 Today, four new members of the National Baseball Hall of Fame were announced, and two of them I already had on baseballs.  Adding these two Hall of Famers puts me at 137 Hall of Famers in total.  I had picked up this Jim Thome at the 2016 National and blogged about it here.  Check the link for a breakdown of Thome's stats.  He was one of my favorite players in his career, and now he is a Hall of Famer.  I am really excited because he is a former Kinston Indian, and, as far as I know, the first Kinston Indian to be elected to the Hall of Fame. 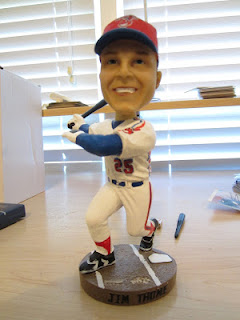 Here is my Thome bobble head from a promotion back with the Kinston Indians.  I am really glad that I picked up this bobble head when I did. 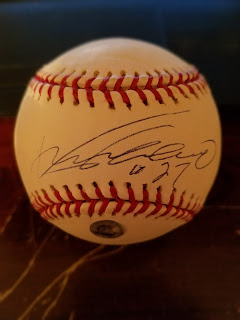 I just realized that I never posted this Vladimir Guerrero signed baseball that I picked up at last year's National.  I thought I got around to it, but I guess I never did it.  I got the ball for a steal, and am glad I did.

Thome was named on 89.8% of the ballots; this was his first time on the ballot.  He and Guerrero will join Chipper Jones (97.2%, first ballot) and Trevor Hoffman (79.9%, third ballot).  Also being inducted for 2018 are Alan Trammell and Jack Morris, who were named in December by the Modern Era Committee (Veterans Committee).

Both Thome and Guerrero finished their careers as Orioles, which is kind of cool, I think.
Posted by William Regenthal at 9:33 PM