I got a package in the mail the other day from Cam over at "The Bullpen Cardboard".  He is a nice kid whom I have traded with on occasion.  He got wrapped up in school, so this package was some 3-4 months in the making, but that wasn't too big a deal to me. 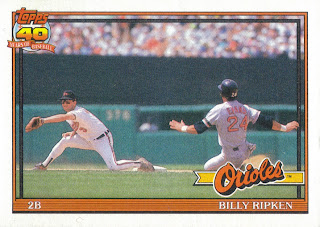 Cam sent me a bunch of early to mid 90s Oriole cards.  One of which was this 1991 Topps Billy Ripken.  1991 Topps doesn't get the praise it deserves in the annals of Topps history.  The 2009 set (where Topps vastly improved their photo quality) appeared to be a throwback to the 1991 set; a minimalistic border and fantastic photos and action shots.  I really like the 1991 set.  I might build it again, just for fun, since I see 1991 boxes all over the place, and cheap! 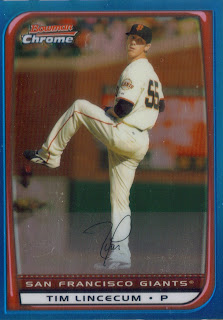 Cam was nice enough to include a Bowman Chrome blue parallel of Tim Lincecum for my son, Chris.  It is too bad that Timmy is having such a terrible year.  Chris doesn't quite understand that, yet, but even if he did, I doubt he would leave as a Timmy fan. 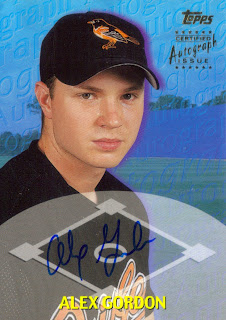 Finally, Cam included this 2000 Topps Alex Gordon auto.  No, not THAT Alex Gordon.  This Alex Gordon was signed as an undrafted free agent by the Orioles in 1998 at the age of 18.  He displayed decent power potential in the minors hitting 54 homers in 356 minor league games.  He never got any higher than High A ball before his career ended in 2004.  I wonder what he is up to now?

Thanks for the package Cam!  I mailed something off to you today.
Posted by William Regenthal at 8:02 PM