I was able to add another Hall of Famer by taking advantage of an Ebay auction that my buddy Andrew sent me in an instant message the other day.  This Rod Carew baseball was ending in about 45 minutes and he sent it to me thinking it was low enough that I might bid on it.  He was right.  I ended up getting this ball for $46 including shipping.  Carew baseballs run for approximately $75-$100 on Ebay and $100 on Carew's own website.  So, I got a nice deal. 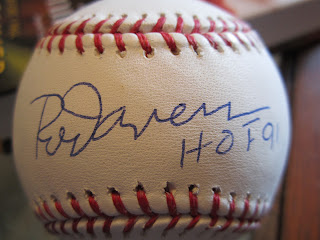 The ball is a JSA authenticated Selig ball and it comes with the "HOF 91" inscription.  He is my 68th total Hall of Famer and my 66th player/manager/executive.

And yes - grrrreat deal. How do I sign up for those good EBay deal notifications? :)