You've most likely never heard of her.  I hadn't until I did a Google search for TTM successes from former members of the AAGPBL (All American Girls Professional Baseball League).  Yeah, I had no idea who Sophie Kurys was, until the Google search brought up her name.  Then, I did a Wikipedia search and was astonished at the accolades that Kurys had received during her 10-season career, all with the Racine/Battle Creek Belles. 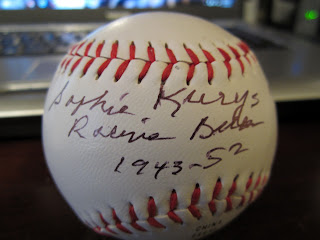 Among all professional baseball levels (minor leagues, MLB, Negro Leagues, Japan, AAGPBL), Kurys has the second most stolen bases of all time, second only to Rickey Henderson, with 1,114, which stood as a World Record until Rickey Henderson broke it in 1994.  Kurys was also a 4-time all star, 2-time league and playoff champion and she was the AAGPBL MVP in 1946. 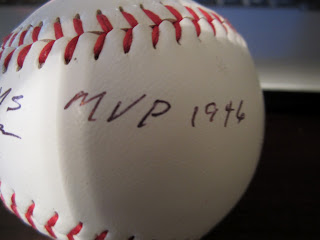 She led the league in stolen bases seven times, once stealing 201 bases in a single season, which still stands as a record today.  To put that in perspective, Rickey Henderson has the MLB record of 130 that he set in 1984 and that record is 71 stolen bases fewer than Kurys' mark. 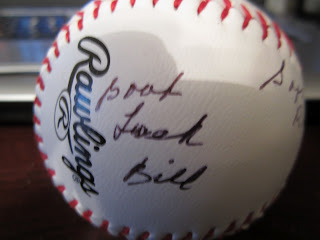 Kurys (b. 1925) is my 58th TTM success, and my first from the AAGPBL.  Many of you know of the AAGPBL from the 1992 film A League of Their Own (which is one of my favorite baseball movies, behind Bull Durham).  I still don't believe enough is said and written about the Womens' league.  Kurys would be a lock for the Hall of Fame if she had played in MLB.  Maybe someday soon, she might get actual consideration based on her career numbers.

In all, this is one TTM Success that I am really excited about.  The ball looks great and carries inscriptions showing her 1946 MVP and a message of luck to me.  Thanks Ms. Kurys!
Posted by William Regenthal at 7:44 PM