I got my 61st TTM success when I got home from work yesterday.  I would have posted it then, but I had been up since 4AM, so I decided to be lazy and put it off a day. 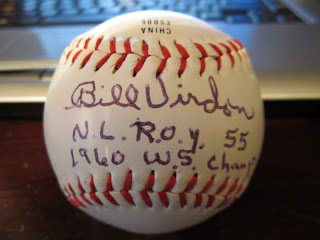 I've gotten several signed balls from members of the 1960 World Series Champion Pirates:  Dick Groat, Vern Law, Bob Skinner and Bill Virdon as TTM successes, and Bill Mazeroski as one of my Hall of Fame signed baseballs (got that one in a trade, along with Don Drysdale for a 3 piece, auto Albert Pujols card).  I also have Virgil Trucks, of course, who was one of the coaches for that team.
Posted by William Regenthal at 6:17 PM

Very nice and the inscriptions are awesome. Congrats.