I was finally able to knock off some huge Hall of Famers recently when I sent a check to the Columbia Antique Mall (The antique store that I visit when I go to Columbia to see my brother).  I got a really good deal on this Willie Mays baseball because I bundled it with another signed ball that I will discuss later. 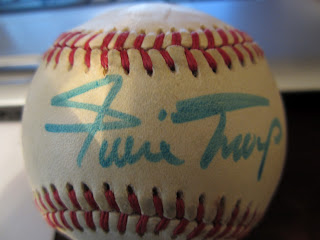 This ball has been signed in blue marker, is PSA/DNA authenticated and is on a really old Chub Feeney ONL Ball.  Mays marks my 69th Hall of Famer, and my 67th player/executive/manager.  I was really happy to throw some support toward Conrad over at the Antique Store; he is a really nice guy and is a 'friend of a friend.' 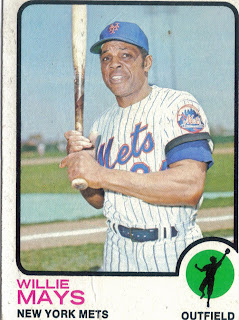 Mays was elected to the Hall of Fame in 1979 when he received 94.7% of the vote, his first year of eligibility.  I'd like to hear some of the reasons why 7.3% of the writers DIDN'T vote for him.  Anyway, I'm really excited that I now have a Willie Mays ball.  I've been waiting a long time to take his name off of my list.

Stay tuned to see who the other Hall of Famer was that I got.

This is the second Mays ball I've seen today in Sharpie. Congrats on HOFer #69!