I was sent an email on Friday from a guy who found my blog.  Apparently he came across several signed baseballs.  He was able to identify Yogi Berra on one and Carl Yastrzemski on another. 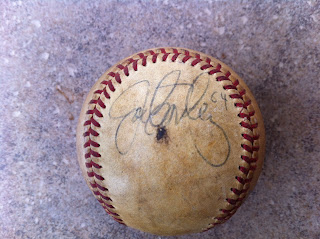 This ball, however, the fellow has yet to identify.  I tried and was unsuccessful in identifying who signed it.  I was wondering if anyone in the blogosphere could tell who, if fact, signed this ball.  There aren't any awards for figuring it out, merely solving a mystery.  Any ideas?
Posted by William Regenthal at 5:31 PM

I'm going with Joe Bradley - drafted in the 22nd round of the 1985 amateur draft by the Baltimore Orioles.