My favorite current Oriole is now back with the team after missing over a year with post concussion syndrome.  Brian Roberts has been out of the Oriole lineup since he re aggravated a concussion by diving back into first base on May 16, 2011 at Fenway Park.  After much speculation as to whether he would even be able to play again, Roberts was batting leadoff tonight and went 3-4 with an RBI. 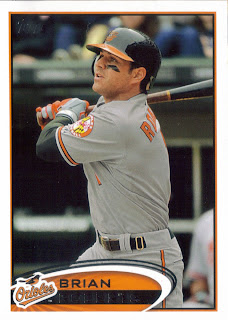 After Cal Ripken retired after the 2001 season, I was struggling to find an Oriole who I could follow with as much fervor as I had for Cal.  I discovered Roberts during the 2004 season and my affinity for him was solidified when, on June 28, 2005, I witnessed Roberts hitting a walkoff home run against the Yankees in extra innings at Camden Yards.  I had gone to the game with a former friend of mine after purchasing an authentic Roberts jersey earlier in the day.  Wearing the jersey when Roberts came to bat in what I believe was the 11th inning, I looked at my friend and told him, "Watch, Roberts is going to hit a walkoff..."  Well, he did, and the ball landed in the deck just below us.  It was magical.  I lost my voice that night and celebrated at a bar where a couple Yankee fans from New Jersey bought my friend and I shots of Crown Royal.  Oh, what a night.

Roberts has always been a catalyst atop the Orioles' batting order, and he has been sorely missed.  I'm hoping he is back to stay on the roster, because if he remains healthy and productive for the rest of the season, it will be much like the Orioles pulled off a trade... without giving up anyone.  All they need now is to get Nick the Stick and Reimold back and maybe they can continue their winning ways that they have begun the season with.

Welcome back, Brian, you were sorely missed!

Posted by William Regenthal at 12:25 AM