It was pretty easy, buying 6 jumbo boxes, but I have completed the 2012 Topps set.  I got 3 boxes of Series One and 3 boxes of Series 2 and was able to put together 2 complete sets, actually.  If any of you wants the other set, I would be willing to sell it.  Also, those of you who expressed interest in some of the hits from Series 2, please shoot me an email and we can discuss. 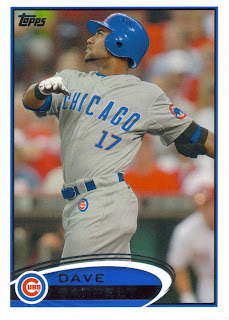 Completing 2012 has put me with completed  Topps sets of:

I am currently working on 1959, 1969, 1971 and 1997; those are in various stages of completion.  1997 hasn't been added to my needs list because I pretty much need to bust an entire box of Series Two in order ot have enough cards to be able to list out what I need.
Posted by William Regenthal at 5:55 PM

How is the Dave Sappelt not a rookie card?