I was able to knock another Hall of Fame baseball off of my list with the help of my good friend Andrew over at Andrew's Baseball Cards (he needs more followers).  Andrew knew I needed Seaver, so, during one of his sessions on Ebay, he located an auction for a Seaver ball that was ending soon and sent it my way.  $39.99 (and free shipping) later, it was mine! 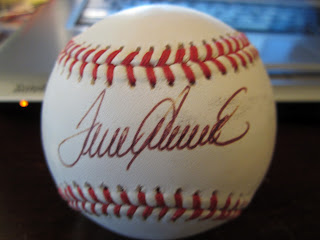 Seaver is my 67th Hall of Famer (65 of whom are players/executives/managers and 2 of which are broadcasters - I have added broadcasters and writers to my HOF needs list, check it out!).
Posted by William Regenthal at 5:41 PM

Hey, I need more followers too. :)