I sent him 2 TTM requests and got no response.  Finally, I decided that I would go ahead and bite the bullet and buy a Yogi Berra signed baseball.  My 70th Hall of Famer (and my 68th player/manager/executive) is definitely an all-time great.  I got this ball (along with my Willie Mays ball) from the Columbia Antique Mall. 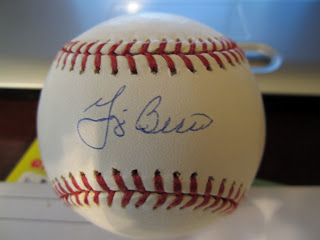