After taking a much needed and well deserved break, I had one of my padded mailers waiting for me in my mailbox this afternoon.  Inside my mailer was a signed baseball from Dodgers and Padres legend, Steve Garvey. 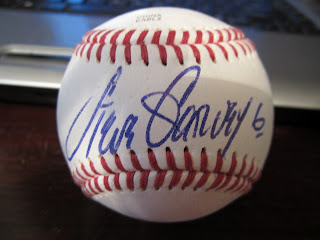 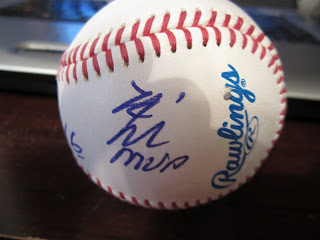 Garvey failed to be elected to the Hall of Fame in his 15 years of eligibility, garnering at most 42.6% of the vote in 1995.  He is a likely candidate to be elected when his turn comes via the Veterans Committee.

Also, I apologize for not posting much lately.  I haven't had much to write about, I've been sick and I've been scraping and painting the ceiling in Chris' bedroom.  I plan on being back, now.  I got my 2012 Series 2 wrapper redemption packs in, so that could be my next post, unless I get another TTM tomorrow.  We'll see how I am feeling.  Anyway, leave me some comments, I missed you guys, even though it has only been a little over a week.
Posted by William Regenthal at 5:36 PM

Welcome back! Everyone needs a break sometimes, don't worry one bit about that man. We're still here. Great success, the autograph looks so crisp and of course you can't top the player! Nice job!