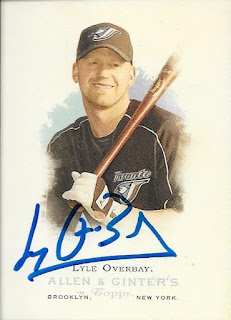 Allen & Ginter cards really look great when signed, and this 2006 version that I got back signed frm Lyle Overbay is a fine example.  Overbay is one per, so I wasn't able to send any of my other cards I had of him, but this one was worth the limit.