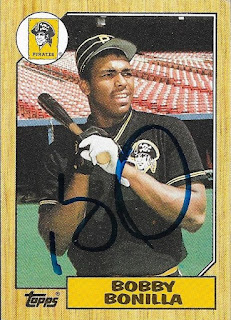 I cashed in my Speedway points for a $25 Ebay gift card, and also had some EBay Bucks that I could use.  With that stuff, and an additional $10.00, I picked up three cards for my 1987 set of some tougher autos.

Bobby Bonilla has no need to raise money by doing signings.  He hasn't signed TTM in about 5 years, and who knows if he will again.  So, with my little bit of money, I went ahead and picked up a signed 1987 Topps, so I could go ahead and cross it off of my list.

Bonilla appeared on the 2007 Hall of Fame ballot, but received only 0.4% of the vote.
Posted by William Regenthal at 7:10 PM