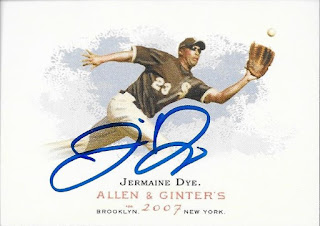 The $40 I paid for the 2020 Harvey Address Book was well worth it when I got this success back from Jermaine Dye.

I had a ton of Dye cards, but had to narrow it down to the three that I ended up sending in.  I really liked the above 2007 Allen & Ginter, and it turned out great. 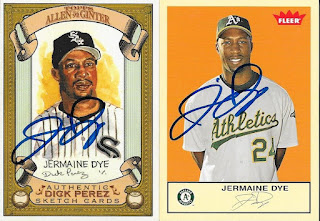 The 2007 Perez sketch card from 07 Ginter turned out really well, too, even though I wasn't a big fan of the cards.  Some of them just looked goofy.  Still, I didn't have any signed ones in my album, so this Dye will be a nice addition.

Finally, the 2005 Fleer (I think it was Fleer Tradition) also looks really sharp.

He appeared on the 2015 Hall of Fame ballot, but received  no votes.

Dye was a solid player. I remember he spent a few years in Oakland... but it seems like his best years were in KC and Chicago.