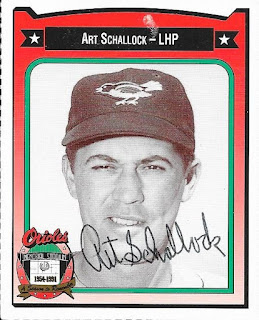 Here is another signed card from a former Oriole that I pulled off of the Wikipedia List of 100 Oldest Living Former MLB players.  Check the list out, it is very interesting.

I saw Art Schallock on the list, and pulled his card from my 1991 Orioles Crown set.  It looks like this was the only card of him, but I have been wrong before.