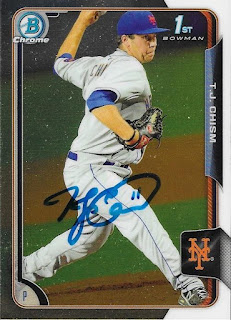 I had TJ Chism's cards in my box for a while, so I could send to him TTM, but it took me some time to find his address.  My friend, Gerard, found it for me, and I sent to him.  The cards came back looking great.

I'm not the biggest fan of 2015 Bowman.  In my opinion, the crds are really hard to read when you are leafing through them due to the foil letters and vertical type.  I usually have to flip them over and go through them by looking at the backs, but maybe that's just me.  If a card is hard to read quickly, they fall out of favor with me really quickly.  That being said, I like getting them signed, because that removes them from my box, and I have less and less cards to look through. 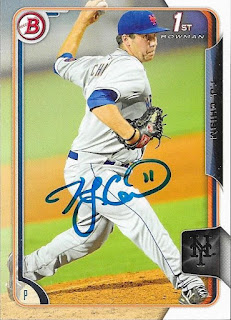