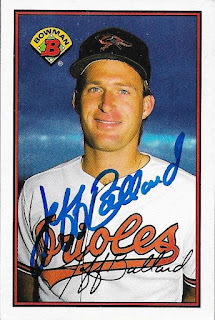 When I add signed cards to my albums, I especially like adding "different" cards.  This TTM success from former Oriole, Jeff Ballard, sure had some different cards included.

First off, the above 1989 Bowman turned out really well.  I actually like this design, and have a lot of the cards, but the odd sizing of the cards lends to them getting destroyed in my boxes, and I also have to get specialty album pages to hold them.  Still, when one can come back signed, they tend to look great, as has this Ballard. 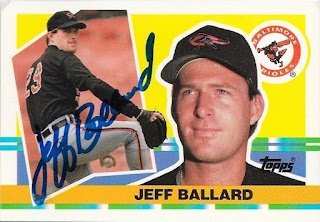 I also have a bunch of Topps Big cards from 1989 and 1990.  I'm not certain of the years, but there are a ton of them in my bulk boxes.  I rarely am able to get them signed, but when I do, they look pretty nice.  This 1990 Topps Big really looks good.  It'll help me fill out the larger card page at the front of my current album. 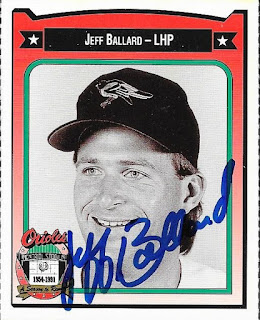 I was sending all of this other stuff, so I went ahead and sent along my 1991 Crown Orioles card of Ballard.  Again, I am not going for the set by any means, but I'm happy to pull a few of these from the box and get them signed when I am able.

Finally, here are the three other cards I sent.  Someone a while back sent me a team set (or close to one) of the 1988 Rochester Red Wings.  At one time, they were the AAA affiliate of the Orioles.  I have gotten a few of the cards signed, and they look really cool in my album.  I finished the request up with a 1989 Score and a 1990 Topps All Star.