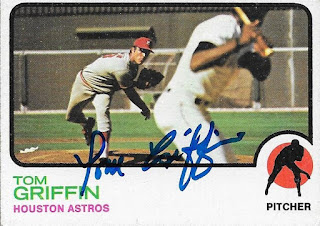 My stack of stuff to be blogged is so huge right now, it isn't even funny.  I've had a consisten stream of TTM successes coming in lately, and I also have gotten some trades in.  Not to mention, the signatures on the ball that Mom gave me.  I need to get to work and get some posts done.  That being said, I took it easy yesterday and didn't even post at all.  Really runs counter to what I just said.  I guess I need to get on it today and try to get some posts out.

Anyway, I got a few cards signed TTM from Tom Griffin.  I like the action shot on the 1973 Topps above.  They aren't the polished shots that you see today, but really, the shots aren't bad.  There's something to like about the wide angles, and early attempts at the action photography on a card. 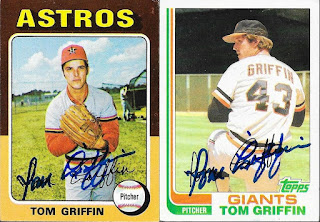 I wish I had more 1975s to send out, but I took part in a secret Santa a few years ago and helped someone with their set needs list.  I never did get a thank you, so I'm really regretting even bothering with doing that.  I should have held onto the cards and sent more TTM.  At that time, I wasn't doing that as much, and definitely wasn't doing it with cards.  Oh well.  I hope I helped the guy out.

1975 Topps is a really cool set, and was one of my favorite ones that I put together.  The Yount and Brett rookie cards are popular, but really, the design it what does it.  It is delightfully freaky; nnot super trippy and scary like 1995 Fleer (which I also enjoy).  Griffin signed over top of the faux signatures on the 75 and the 1982 beside it.  I think that kind of takes away from the auto.  I wouldn't mind if Topps never did the facsilime autos ever again.